Their punishment was final by Damian

Chinese torments
Ai was a beautiful girl. One of the most respected in her village. Most of the men there had imagined seeing her naked, wondered what her body might look like. Now, they knew. She had been convicted of “The ordeal of a thousand lashes”.
In the morning she had been dragged into the town square, where the ceremonial cross stood. She was forced to strip, in front of the crowd who had gathered to watch the proceedings. She did so slowly, almost teasing them. She still had some pride.
The ordeal of a thousand lashes was a curious punishment. It was neither a punishment, nor an execution – but it was both. The victim would be tied to an implement of some sort and beaten over a course of three days. If at the end, they survived, they would be free to go. If not… their punishment was final.
Ai, it turned out, was as beautiful without her clothes on as with. Ordinarily, subjects being whipped would be turned so they faced into the cross, with their back bearing the brunt of the beating. For Ai, orders were given that her front face outwards. Her legs were pulled apart and the crowd got a great view of her delicate and well-manicured sex. She tried to resist, but that just excited them more.
She tried to stay proud, but fear soon began to grip her when they saw the instruments with which she was to be tortured. They were on a ceremonial trolley, and were wheeled out like a fine dinner. There must have been at least two dozen different whips and canes. Some were smooth and leathery, others had many tails and knots, some were thin, some were thick. There was one that looked as if it was covered in thorns… 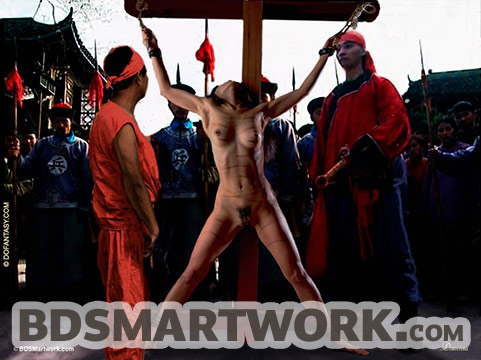